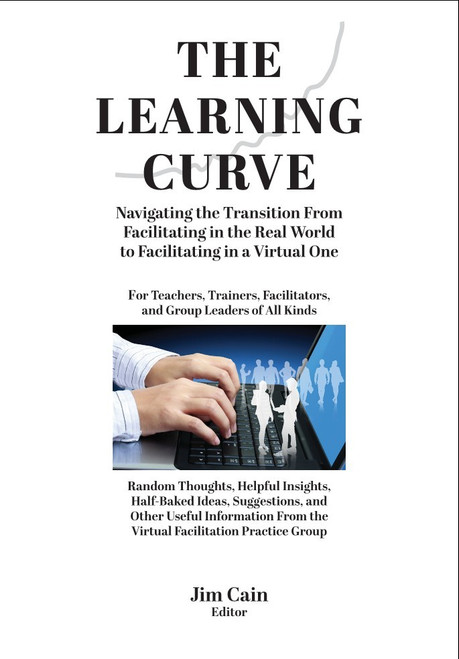 The Learning Curve is a one-of-a-kind resource for anyone who is looking for advice and guidelines on how to effectively navigate the transition from facilitating in the real world to facilitating in a virtual one. Featuring members of the Virtual Facilitation Practice Group, The Learning Curve offers information, ideas, and insights that can enhance the efforts to effectively facilitate in a virtual setting.

The ripple effects of the first Virtual Facilitation Practice Group created by John Losey have already spread around the world. Every day, new virtual methods and techniques are being created to answer the one basic question on everyone’s mind these days, “Well, if we can’t get together in the real world, what can we do?”

Inside The Learning Curve, you’ll find the collective wisdom of facilitators, group leaders, teachers, and trainers of all kinds, as they, like you, struggle to make sense of a situation that makes no sense at all.

The transition from facilitating groups in the real world to facilitating groups in the virtual world is perhaps one of the most difficult and yet necessary transitions of our lifetime. It is said that there are three kinds of people. Those who make things happen, those who watch things happen, and those who wonder what the heck just happened. The members of the Virtual Facilitation Practice Group are absolutely within the first category—the people who make things happen—and this is the story of how they were able to reimagine, reinvent, and recreate themselves as they transitioned from real-world group facilitation to the virtual world.

101 Reasons Why Camp Is for the Camper - Poster

The Big Book of Virtual Games